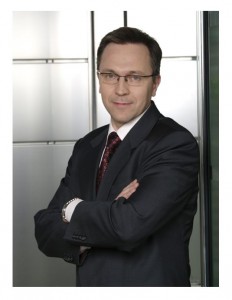 Professor Krzysztof Rybinski holds MA in computer sciences, and Ph.D. in economics. He has an extensive professional background. He worked as software engineer in Tokyo, director of the Soros Foundation programs in CEE,  a consultant to the World Bank.  He was chief economist and managing director at commercial banks. In 2004, he was appointed the Deputy Governor of the National Bank of Poland by the President of Poland and performed this function for four years until 2008. He was in charge of research, foreign exchange reserves management, payment systems, cash circulation management, monetary statistics and international relations. Under his supervision National Bank of Poland changed its investment strategy which resulted in additional one billion dollars profit for Poland. In 2004-2005, he was member of the EU Economic and Financial Committee, and in 2007-2008 a member of the Polish Financial Services Authority. In 2007-2008 he served as a World Bank alternate governor for Poland.  He was also member of the supervisory boards of several financial sector companies (2008-2009) and Partner in Ernst & Young Poland (2008-2010). Between 2010 and 2015, he has been Professor and Rector of Vistula University in Warsaw, which offers education to students from more than 40 countries. From February 2015 he is a Rector  of Narxoz University in Almaty, Kazakhstan.

Krzysztof Rybinski was economic advisor to several Polish governments. In the last few years he was a coauthor of country higher education strategy, e-government strategy and intellectual capital strategy.

Krzysztof Rybinski is author of numerous refereed papers in economics and (co) author of several books. In March 2012 ranking he was ranked the fourth best Polish economist by  number of scientific citations. In October 2012 he received the business award of most respected Polish economist. He has also contributed hundreds of articles on economics and financial markets to Polish newspapers. He published in The Wall Street Journal, Financial Times and The Economist. He was the first senior central banker in the world to have started a popular and often quoted by media economic blog www.rybinski.eu already in 2006.

You can drop him  an email at: rybinski (on the server) rybinski.eu