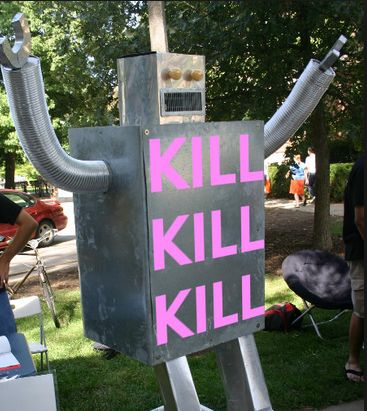 A robot crushed a worker at a Volkswagen production plant in Germany. A 22-year-old man was helping to put together the stationary robot that grabs and configures auto parts when the machine grabbed and pushed him against a metal plate. He later died from the injuries. Volkswagen did not release the man’s name. A spokesperson for the car company told the Associated Press that the robot can be programmed for specific tasks and that the company believes the malfunction was due to human error.

The first ever reported case of a robot killing a human was on 25 January 1979 in Japan. A 25-year-old Ford Motor assembly line worker was killed on the job in a Flat Rock, Michigan, casting plant. Williams died instantly when the robot’s arm slammed him as he was gathering parts in a storage facility, where the robot also retrieved parts. Williams’ family was later awarded $10 million in damages. The jury agreed the robot struck him in the head because of a lack of safety measures.

We should expect more such cases in the future. Robots are cheaper and considered more reliable than human workers, they do not belong to trade unions, neither they need pay raises nor holidays. And artificial intelligence is getting more and more advanced. So it is natural to expect that companies will invest in robots and AI development. One day a robot will be created that will dominate human intelligence, and not by 10 IQ points, buy by a factor of 100 times. What will happen then? Will humans be able to pull the plug, or will robots treat humans as we treat less intelligent than us home pets today. It is fun to have them, play with them, feed them and we are sorry when they die. And we breed pets and train them so that look nice and behave properly.

Today media are busy with Greek crisis. But Greek problems are peanuts compared to future challenges to humans in a robots-dominanted world. It is coming. Terminator in the real world.