Economists have warned for a long time, that banking crisis could translate into sovereign crisis amid huge fiscal deficits and rising debt levels in many countries. Greece is the first warning sign. With fiscal deficit expected to top 12% of GDP in 2009 and 9% in 2010 public debt could easily reach 130% of GDP in no time. So the big fiscal effort is needed in Greece, whch is mission impossible with economy in recession.

Greece rating was cut to BBB+ by Fitch. In normal times ECB refused to accept government bonds as collateral in open market operations when rating fell below A, after Lehman it was temporarily lowered to BBB-, lowest investment grade. Greece is still two notches above this limit, but the debt rating outlook is negative which suggests that further downgrades are in the pipeline. While it is unthinkable (is it?) that EMU member state debt will be rated as junk, when this happens Greek banks will loose ability to raise liqudity. This is on little concern as Greek banks have large deposits base, but is problem persists Greek citizens may feel one day that their deposits are not safe at their banks.

Before Lehman ECB accepted only government bonds with at least A rating, but it seems unlikely that ECB delivers a final blow to Greece by going back to normal anytime soon.

Greece is famous for Greek salad, tzaziki, and lovely holiday sites. But it is also famous for lying about the shape of its public finances. They lied about fiscal deficit when joining eurozone, the misguided the public and the European Commission about its deficit presently as well. Please find below the September European Commission forecast for Greece, predicting deficit about half the actual size. 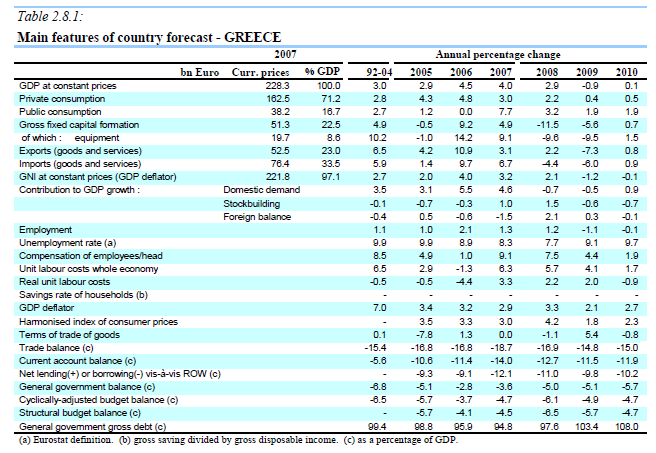 More about Greece downgrade can be found here and here.

So what happens next? Greek government should do its homework, ie. reduce fiscal and external imbalances. In the meantime more downgrades should be expected (with Spain among the top suspects). Each such downgrade will increase Greek bonds’ spreads and raise the cost of funding, making fiscal adjustment even more difficult.

But it is only part of the story. Recent European Commission sustainability report shows what permanenet fiscal adjustment is needed to make EU members states fiscal positions sustainable in the long run, given initial budget positions and the effect of aging on public finances. Results are below.

Anything draws your attention? Greece (EL) is among three countries that have largest long-term fiscal imbalances, depending on the method this adjustment exceeds 10% or 15% of GDP. With larger than expected deficit, today this adjustment is even bigger.

So the naked truth is that Greece is practically a hopeless case in the long run.The good news is that holiday condos in Greece will become a lot cheaper in coming years, attracting buyers from all over Europe, the bad news is that Greece is likely to send more shockwaves to the markets in the future. The natural trade idea is to short Greek assets, make money and buy cheep holiday place in Greece using that money. There is no better way to retire, enjoying nice sea view, sipping retsina and tasting great Greek tzaziki.