What really scares economists about the present crisis? That despite spending more than 11 trillion dollars (including guarantees) by governments and central banks the crisis will spiral into global recession and deflation. One very effective way to trigger global recession is trade protectionism, when countries trying to protect their troubled industries impose import duty or non-tariff barriers on offshore producers. When one country does this then other countries follow with retaliation and trade collapses, more jobs are lost which  leads to recession. We have seen this happening in 1930s.

See chart below (thanks go to David Wheelock from Fed St.Louis), which shows monthly value of imports in 75 countries between 1929 and 1933. Trade implosions happen, you have been warned. 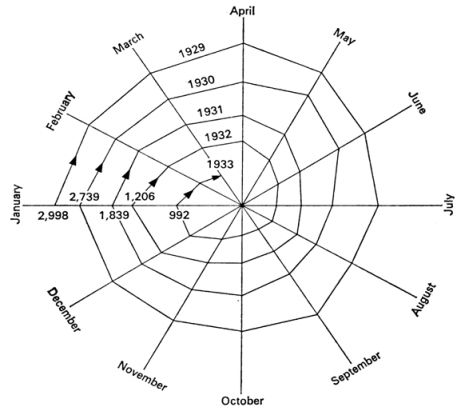 Economic theory does suggest that large country can effectively raise tariffs at the expense of other countries, see Wikipedia

link which probably explains why China, USA, India, Indonesia, Russia and many others may wish to flirt with protectionism. There is vast literature explaining that trade has positive effects on incomes and standards of living, see old paper by Frankel and Romer for example and the largest living example is China, which successfully pursued export led growth model and reduced the extreme poverty by hundreds of millions, the only large and meaningful step towards fulfilling Millennium Development Goals, other parts of the world failed badly to reduce poverty, Sub-Saharan Africa is the stark example, despite receiving large aid from the World Bank and other donors.

Economic theory, evidence and experience suggets that if world falls into protectionsm trap it will be very difficult to avoid global recession. Recent International Herald Tribune article presents evidence that many Asian countries launched policies to protect their producers from foreign competition, a quote:

“In the last two weeks, Chinese officials have announced a series of measures to help exporters. State banks are being directed to lend more to them, particularly to small and medium-sized exporters. Government research funds are being set up. In Hong Kong, the chief executive plans to seek legislative approval by late January for the government to guarantee banks’ issuance of $12.9 billion worth of letters of credit for exports.

Particularly noteworthy have been Beijing’s steps to help labor-intensive sectors like garment production — industries from which China had been trying to wean itself as part of a move to climb the ladder of economic development toward higher-wage, more-skilled activities. Now China has become much more reluctant to relinquish the bottom rungs of the ladder to countries with even lower wages, like Vietnam, Indonesia and Bangladesh.For instance, China has been restoring export tax rebates for the textile sector that it had been phasing out. Municipal governments have also stopped raising the minimum wage, which had doubled over the last two years in some cities, reaching a peak of $146 a month in Shenzhen. “China will resort to tariff and trade policies to facilitate export of labor-intensive and core technology-supported industries,” said Li Yizhong, the minister of industry and information technology, at a conference on Dec. 19.” […]

“The third most populous country in Asia after China and India, Indonesia is already acting to limit imports of garments, electronics, shoes, toys and food — five large categories in which Indonesian producers are struggling to compete with China.Starting in the new year, importers of these products will have to be registered with the government, use only five designated ports for their shipments, arrange for a detailed inspection of goods before they are loaded on a ship or plane bound for Indonesia and then have every single container exhaustively inspected on arrival by Indonesia’s notoriously slow customs bureaucracy. The plan, designed to comply with WTO rules, was adopted after heavy lobbying by Indonesian manufacturers and labor unions.”

It does not look good. Welcome to hell of protectionism in 2009. Knock, knock. Who’s there? Recession.