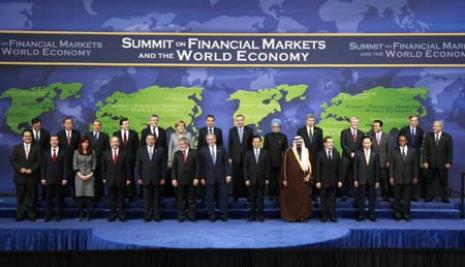 This declaration identifies the root causes of the crisis:

“During a period of strong global growth, growing capital flows, and prolonged stability earlier this decade, market participants sought higher yields without an adequate appreciation of the risks and failed to exercise proper due diligence. At the same time, weak underwriting standards, unsound risk management practices, increasingly complex and opaque financial products, and consequent excessive leverage combined to create vulnerabilities in the system. Policy-makers, regulators and supervisors, in some advanced countries, did not adequately appreciate and address the risks building up in financial markets, keep pace with financial innovation, or take into account the systemic ramifications of domestic regulatory actions.”

It is a rare event indeed, that developed countries policymakers say openly “we screwed up and we are sorry”. So we need to congratulate them on this part. Then come solutions and actions to be taken.

Adopted action plan, to be implemented by G20 finance ministers in cooperation with the IMF, important parts are below:

Leaders stated that they will refrain from raising new barriers to investment and trading in goods and services.

Now few comments of mine.

There is nothing new or unexpected in the statement. There is no new money committed, G20 just says that IMF, WB and other multilateral banks resources will be review and countries stand ready to increase them. To get the numbers right recall that IMF firing power is 250bn dollars, while developed countries have already allocated some 9 trillion dollars to crisis fighting (governments 7tr – including guarantees, as estimated by the Bank of England in recent financial stability report ) and 2tr in central bank lending against dodgy collateral). In other words there are a lot of words and no meat in the statement, so markets may be disappointed, but lets see what will be the opening in Asia on Monday.

invest much more in the emerging markets as a group. So the top priority should be creating deep and liquid markets in Asia and in the Gulf, that would provide excellent market infrastructure, top corporate governance standards and legal protection. Statement is silent on this aspect of solving the crisis.

Finally, I am of the opinion, that if you have something very important to say, and the whole financial world is waiting, you should say it on one page in a plain language. When business people adopt the action plan, the give precise framework and set performance measures, so that you know whether the plan implementation goes well. When politicians create action plan, it is in a fuzzy language over a hazy horizon. Then they can go home and every leader can interpret the statement in his/her homeland in line with local political needs. I am not sure we have time for this standard political communication in crisis times.