Some time ago I wrote a post on happiness. I argued that GDP growth or high wage is not enough to make you (or your country) happy. I read this post again and I liked it so much that I decided to post it again with one addition at the very end, taken from today’s World Bank report. This new part will explain what makes Central Europeans happy. Enjoy.

The issue of the Economist has a long article on happiness. You can also find a global happiness map here.

Is money enough? What if your income has risen, but your neighbour bought a more expensive car than you did, again. And by the way, you went to Italy for holidays, and your friends went to Rio. Is your spouse happy about that? Your bonus last year was 2 mln dollars, but you worked 16 hours a day on average, and you had no time to see your parents and to join your friends for Safari in Kenia. Happy?

Economists talk a lot about GDP growth, income per capita, but they rarely talk about happiness. Recent OECD study shows that income is an important component of happiness, but it is not enough, and family and community ties are also important. These results are confirmed by Princeton’s Kahneman et al. paper , which states that permanent income improvement may improve your happiness only transitory, beacuse your reference group changes. In other words once you are promoted to managerial position your start to compare yourself to other managers, you no longer look at your previous peers, below your current level. The same happens when you move to a new neighbourhood, just bought a new house, but still unhappy because your neighbour has a bigger pool. Finally, Bhutan is probably the only country in the world that focuses on gross national happiness, rather than on GDP growth.

Globalization leads to higher global GDP growth, this is not questionable. But does it lead to more global happiness? We see sharp increase in income inequality between countries and within countries. Many people work harder than ever feeling the pressure from Chinese cheap manufacturers. Family values are eroding in many places in the world, there are more singles than couples living their adult lives in the US. Between 1600 and 1950 the average number of children per family was equal to 5-6. In the last 50 years it dropped to 2 (world average).

What can we do about it? Most of us think hard, how do I make more money next year? It is high time to think how do I live a happier life next year? When I asked myself that question I got a very surprising answer. Try yourself. I also found one excellent advice. Start each day as if you had a heart attack the previous day (nothing can make you nervous, and problems that seemed enormous now appear tiny).

The World Bank has presented a very interesting report today. I commented on the main part, ie. macroeconomics, but there was a second part explaining a satisfaction with life. Link to the report will be added later (not available yet) but I reproduce one interesting chart below, which explains what makes Central Europeans happy: 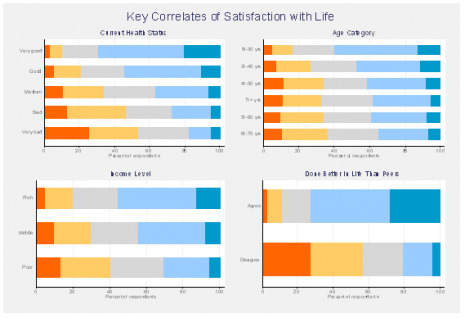 Some results are fairly obvious. People that are younger, healthier and richer are generally more happy with their lives. However the fourth chart shows the strongest correlation. Only those are happy which did better than their peers. So we could all be poor but as long as I am doing better than my neighbour I am happy. It is very true description of Polish mentality. It also explains why still some people were happier under socialism than now. In absolute terms they were clearly worse off, but their neighbours did poorly as well. And nothing makes a Pole more happy than the fact that neighbour has a smaller house, worse car, uglier wife and more stupid kids. It will take decades to change this mentality. We even have a joke on this.

“A Pole named Kazio has caught a goldfish and was awarded one wish, but his neighbour would receive a double of what was going to the lucky Kazio. Take away my eye, Kazio goes”.

And what makes YOU happy?