I came back from holiday, two weeks spent in Cambodia, Myanmar and one day in Bangkok. If you remember my previous post , it was about Cambodia, this post will be about our great time in Myanmar. Myanmar (formerly known as Burma) is a country with great places to see and at the same time a country ruled by military socialists, with all the absurds that come with socialism/communism we very well remember from dark times when socialist party ruled in Poland prior to 1990. But it is definitely worth visiting Myanmar, just make sure that during your visit you avoid government-run hotels and agencies, and use local people services. But before I go on to describe tourist assets of Myanmar let me spend few lines on issues proving that socialism leads to similar degeneration irrespectively of whether it is Europe, Asia or Latin America.

Socialism in Myanmar, a deja vu of Poland 1980s

I could write much more about these absurds. One thing is interesting, they are the same irrespectively of whether communists rule in Europe or Asia. Is it becasue the read the same books (Marx, Lenin) went to the same schools (KGB run establishments in former Soviet Union) or something else. I do not know, but I was struck how much socialism in Myanmar resembled socialism in Poland 20 years ago.

We flew from Siem Reap via Bangkok to Yangoon, the capital of Myanmar. Local time in Myanmar is 30 minutes earlier than Tailand and Cambodia (do you know any other country that moves official time by less than a full hour). Airport is a very ugly place, you are attacked by locals who want to collect your luggage and offer you a taxi ride to the center. It is very crowded and messy, we finally got a minivan and paid six dollars to get us to Summit Park View, a nice hotel with a view on a Shwegadon Pagoda (Golden Pagoda), the only place really worth visiting in Yangoon (other pagodas are just a poor shadow of the Shwegadon). I booked Summit Park view using asiamrooms web site and I got some 10 dollars discount on the hotel room price, however we had to extend our stay for one more night as there was no night train to Mandalay. Double room price was 55 dollars but we called Columbus travel (our travel agent located in Yangoon) and they booked one more night for us for the price of 30 dollars. It makes sense to use local agents to book your hotels.

Pictures of Shwegadon (before and after sunset) are below. 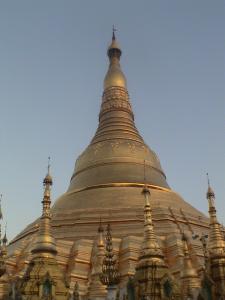 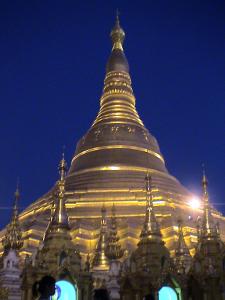 The best time to visit is one hour before the sunset, you walk barefoot around pagoda and then watch the golden roof (real gold) changing color. There are a lot of monks, you may also see an interesting scene when a row of volunteers mops the flor around the pagoda. 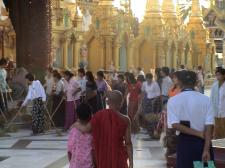 One thing we immediately noticed after arriving to Yangoon was that men wore long skirts (called sarong or longi) instead of trousers, and women paint their faces with sand-color paste. 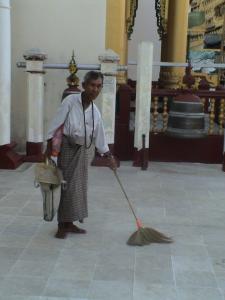 We asked many times what this funny looking make up means and we got three answers: religious reason, sun protection and to look prettier. I do not know which was the correct answer, but it resembles Indians going to war face-paint and we did not see this kind of make up in Cambodia or Thailand. 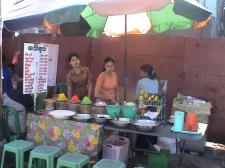 In Yangoon, unlike in Cambodia there are no tuk-tuks and few motor-bikes, there are a lot of old cars and small buses, usually packed with people. Picture below shows a scene when police stopped a car and forced some people to jump on board, we are not sure what happened but our first thought was that they were forced to participate in so-called social works, when government forces people to work for free. 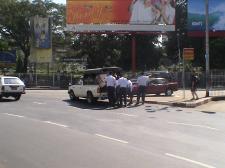 Apart from gloden pagoda you may wish to see Sule Paya, although it almost certainly will fail to impress you after golden pagoda, and you may also stop in Strand hotel (collonial style, remembering British rulling) for a cup of truly delicious tea (we play bridge there as well). 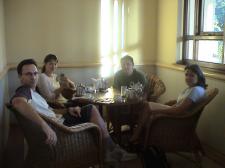 In Yangoon we went to two restaurants. Recommended Green Elephant was OK, but we were not very impressed. However the other evening we went to Chinese restaurant close to our hotel, located in a park with a view on golden pagoda. They had excellent Chinese food, although when we started to play bridge, at one moment we had some 10 waiters surrounding our table, it appears that Chinese really love card games.

One other thing we did in Yangoon was a visit to the famous Scott market, where you can buy wearing apparel, souvenirs, metal and wood carvings and lots of other stuff. You have to bargain, usually final price is 50% of the first price quoted by the seller.

From Yangoon to Mandalay

From Yangoon to Mandalay you can get by plain or by train. We had already booked 12 flights during our trip so we decided to get on a train, although with the benefit of the hindsight I would have gone for a one more flight. We bought four tickets for a sleaper that leaves Yangoon at 4:30 in the morning and arrives at Mandalay at 18:30. Spending 14 hours in a very dirty train does not leave good memories, track is bumpy, train is very slow (it takes 14 hours to travel 650 kilometers) ticket costs 40 dollars. We hoped to see the countryside, but there was notning interesting along the way, we saw a lot of poor people, so when train stopped we gave them food, we gave sweets to kids. My advice is that it is better to fly to Mandalay.

You can see many things in Mandalay, you can climb to the hill, go to see the fortress, visit few stupas. We also went to Inwa (outside Mandalay) to see a very nice teak-wood monastery (we were lucky to see monks teaching kids) and then went to see the longest teak-wood bridge. We hired blue taxi for a full day (it cost 20 dollars) which is an upgrade version of the Cambodian tuk-tuk. The smog in the city was horrible. And do not go to the market there, they sell cheap Chinese stuff that you would not wear unless they pay you to do it. 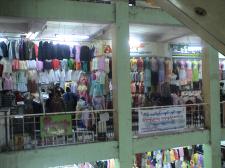 Among the things we visited in Mandaly and around Mandalay the most memorable was the visit to the bridge. The best way is to arrive around three to four o’clock P.M., take a walk on the bridge to the other side of the river, turn left to the village (you can see how they live and cook dinner, see picture below), zip a local cola or beer at the local river restaurant and return by boat (at a cost of 3000 kyat) to take lovely sun-set pictures. I had a very simple camera, so my picures are also simple, but if you are equipped with a better camera, the pictures could well run for National Geographic, it is very beautiful indeed. 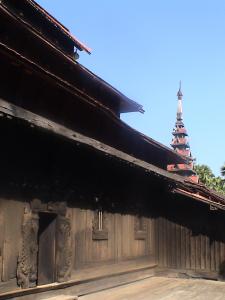 School in the monastery 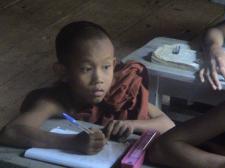 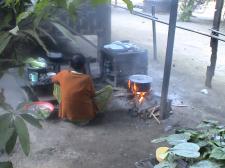 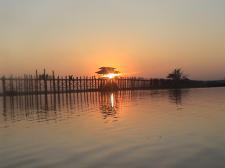 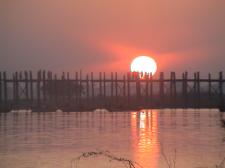 In Mandalay we stayed at Mandalay Hill resort, a very nice hotel, some five minutes drive from the center. If you are not heavily financially constrained I would highly recommend this hotel.

From Mandalay to Bagan by jetty

We took a ferry to move to Bagan. It took a full day and the views along the river were quite boring, compared with grea views we saw during our jetty cruise in Cambodia. It is better to fly to Bagan (or to Nyangu airport to be precise) and use saved time to visit astonishing temples and stupas there. The only event wort mentioning during the jetty trip was a banana-throwing-stop. When ferry approached the bank of the river local village people jumped to the water to sell things to passangers. As there was no demand sellers started throwing things to the ferry (bananas and other stuff), demanding payment in exchange, and ferry passengers threw bananas back to the selling ladies. That way I discovered a new kind of banana, a flying banana. 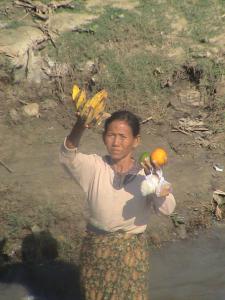 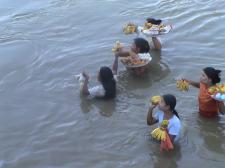 Bagan and the stupa forest

In Bagan there are some 4,000 stupas and temples, so it looks like a forest. We stayed in the hotel in old Bagan called Thande, right on the bank of the river, with a very nice view, great surroundings. Thet have beautiful trees in the hotel populated by squirrels. One thing we did not like were breakfasts.

View from the Thande hotel 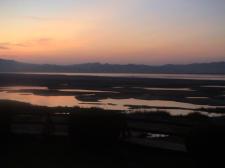 Bagan is a great, a must-see place. We saw two sunsets, visited six or seven most important stupas and temples, went to a local market to buy some souvenirs (be aware that in one area of the market you encounter a terrible smell of a rotten fish, so sensitive people should avoid this part of the market). 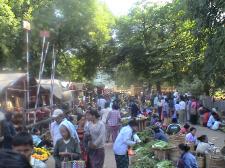 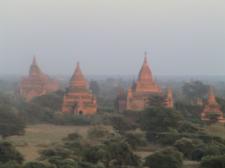 In Bagan we had a prearranged guide (via Yangoon based Columbus travel) with a minibus. Guide name was Zaw (pronouced Zoo) and the driver name was Win. Names in Myanmar are easy to remember, as the name of our guide in Inle lake was Tutu. You should have a guide in Bagan, as there are so many pagodas and temples that it is hard to choose. In the laswt evening we went to a restaurant with a famous Bagan puppet show, you should try it as well. They also have these shows in some hotels, but the performance level is low compared to what they show in this restaurant.

After visiting Bagan we flew to Heho, which is located in the Shan state of Myanmar. There are two tourist sites in Shan stae that most people visit, Pindaya caves and Inle lake. Pindaya caves are some 2-3 hours drive from Heho airport and they feature a relatively small cave (compared to other famous caves you can see in Mayorka or in Poland) populated by 8,000 budda statutes covered with a golden leaf. Honestly we felt that visiting Pindaya caves was not worth travelling for more than five hours (both ways) on incredibly bumpy road, spending more time on Inle lake is a better idea. Although we later met tourists from San Francisco that were very impressed with the caves. 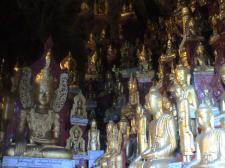 Arrirving at the Paradise B hotel 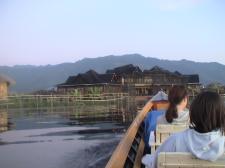 Inda row with their legs, while standing on the boat, so thay they have free hands to fish, smoke or collect vegetables from floating gardens. It is also more powerful. See below, second picture taken in floating gardens, when our engine broke, and we were “saved” by another jetty with tourists from San Francisco. Sticks go down some 4 meters to fix the floating garden, otherwise it would flow away. 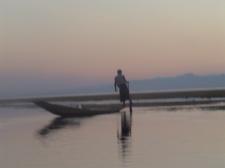 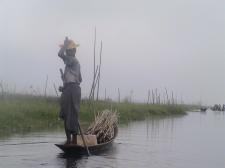 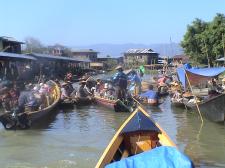 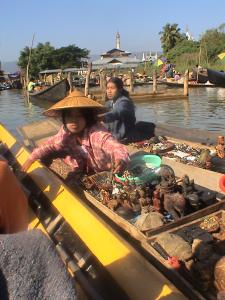 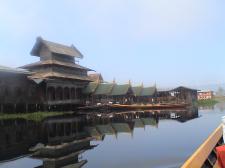 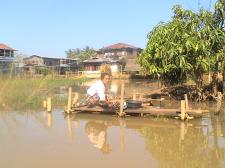 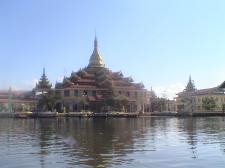 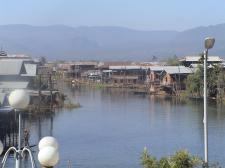 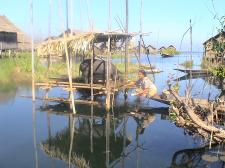 After visiting Inle lake we flew to Yangoon (with two stops in Bagan and Mandalay) with Air Mandalay. Something was broken on the plane as the temperature inside was well above 30 celsius, and one senior pessenger fainted. In Yangoon we stayed at the airport hotel called Seasons of Yangoon. Lobby looks nice, but the hotel smells badly and rooms are very dirty. Do not stay in this hotel unless you have to. Next morning we took Thai flight to Bangkok. Good bye Myanmar.