Rating central banks is definitely needed. Who does a better job than others in delivering low and stable inflation and output in line with country potential? A new study has been prepared by Bank of Canada Gosselin (2006) . Tables below summarize results: 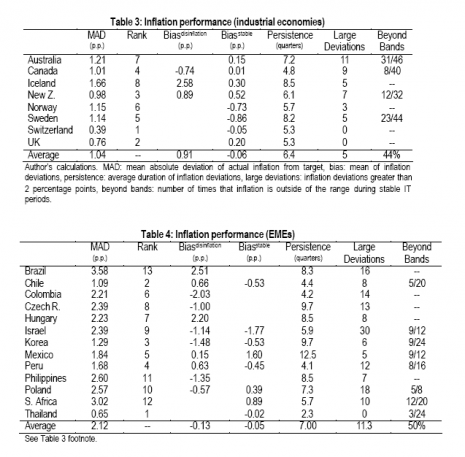 Using this ranking Poland gets 10th place among 13 emerging economies that adopted direct inflation targeting strategy. Of course there were inflation shocks that Poland faced while they were not experienced in other countries, such as EU accession shock. This probably explains why also Czech Republic and Hungary do not score well, 8th and 7th respectively. But among those three countries Poland did worst, which requires further research to indentify whether it was bad luck (stronger shocks than elsewhere) or bad monetary policy. Gosselin sheds some light on this and using another method (which accounts for inflation shocks) shows that Poland scores better than Czech Republic and Hungary (which gets the worst score), but still we scored 8th among 12 rated emerging economies. No matter how you count it, room for improvement is large.

Particularly puzzling is the result suggesting that opaque, non-transparent central banks do better and it stands against many other results suggesting the opposite take a look at papers presented at the NBP conference .